At 4 years old, Sammy* should have been talking, playing, and demonstrating a close bond with his mother. But he wasn’t. The police contacted the Child Guidance Center to express concern about Sammy after they responded to a domestic abuse call at his house. Although Sammy hadn’t been abused, something definitely seemed wrong.

The Child Guidance Center sent a Child First team to visit Sammy’s house. Child First is a service that identifies at-risk children from birth to age 6, and provides intensive in-home support for the child and parents. When the therapist and care coordinator first arrived, Sammy was running around wildly and screaming. His mother was ignoring him. His clothes were soaked with urine. He wouldn’t let himself be touched, and he pinched and hit the therapist.

Sammy’s mother, who had a history of mental illness, was overwhelmed. Most importantly, she paid little attention to her son.  Her husband, who had abused her, was not around.

During regular home visits, the therapist worked with Sammy’s mother, helping her learn to calm Sammy so that he felt safe and cared for. She began to respond to Sammy with smiles and physical affection. Our care coordinator worked with local agencies to help Sammy’s mother access services for herself and her son. Sammy is now in a special education program receiving the services he needs to enter kindergarten. 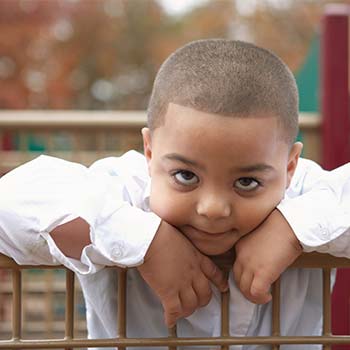